This document contains the specification of the rewards and punishment mechanisms which establish the foundation of the token ecosystem of CRO.

To incentivise validators to run the network, rewards are accumulated and distributed to the validators. There are three sources for the rewards:

The RewardsPoolState data structure stores all the information about the remaining funds and distribution states:

Motivation: To incentivise the validators, the amount of the reward should dynamically react to the actual network conditions such as the total staking and the length of time since the genesis block.

The reward being sent to the reward pool depends on two major factors:

Specifically, this reward rate R can be expressed by the following function:

To visualize this, if we set tau=10 Billion, R0=350, we have the following graph of the function: 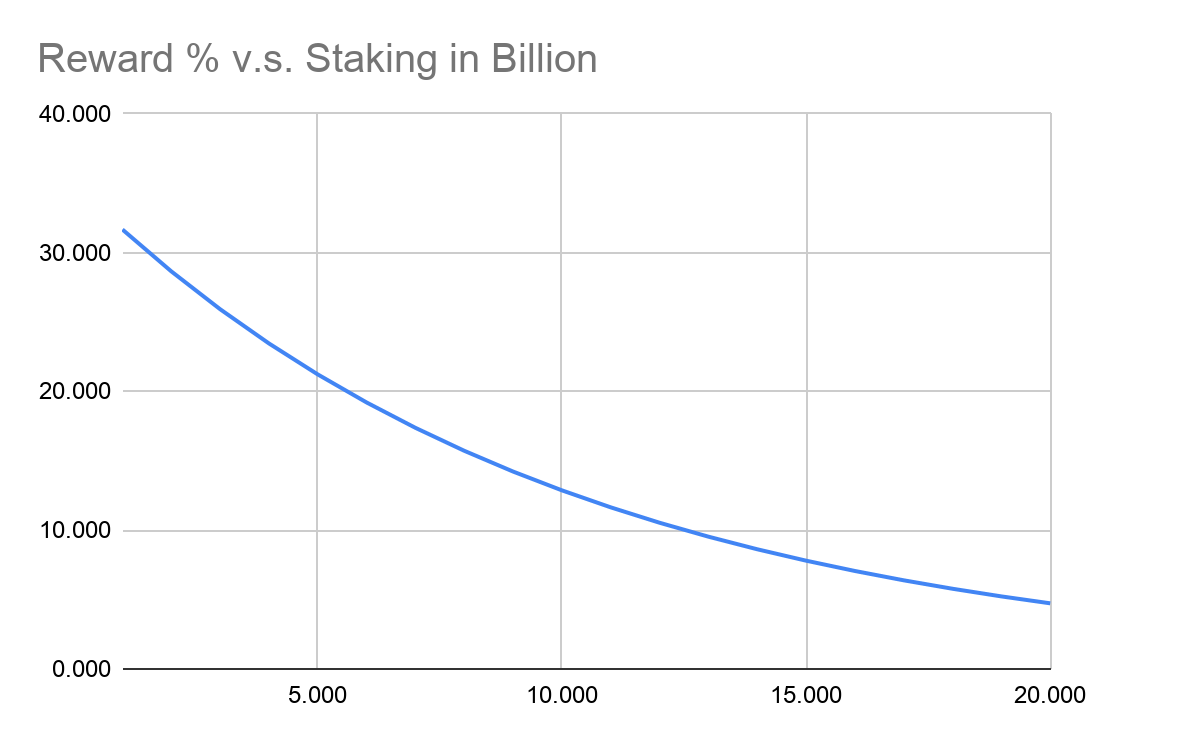 Note that the above reward rate is per annum, and the number of tokens being released to the reward pool (N) for that epoch is calculated by

where S is the total amount of tokens staked by validators to participate in the consensus process; R0 is the upper bound for the reward rate; tau is a time-dependent variable that controls the exponential rate; f is the frequency of reward being distributed per year.

More details about the actual calculation and its configuration can be found in the next section.

Monetary expansion is designed to release tokens from the reserve account to the reward pool, while keeping a fixed maximum total supply.

Precisely, the reward rate is controlled by the following parameters:

represents a daily scheduled reward (every 86400 seconds), with a maximum reward rate of 45% per annum, distributing a total sum of 22.5 billion tokens to the validators. :::

::: details Reward parameters explained: Here is a simple example of how these configuration parameters affect the reward distribution when assuming the amount of total staking is fixed: 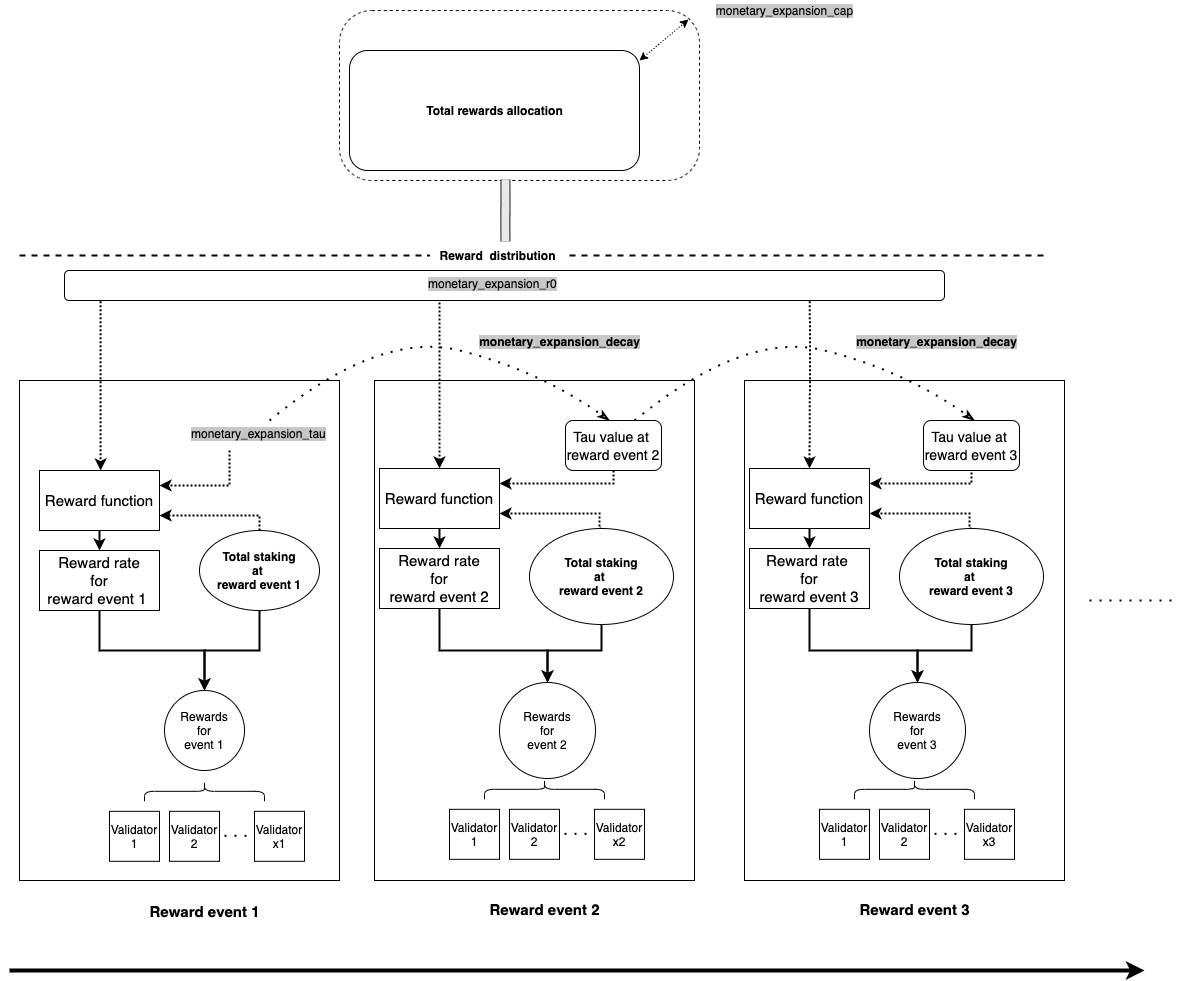 Remarks: The reward rate of shrinks in general after each reward epoch. The contraction rate is controlled by monetary_expansion_decay, which is the decay rate of tau in the reward function.

In addition to that, reward_period_seconds controls how often the reward is being distributed.

At the end of each reward epoch, the number of tokens being released at each period is defined as:

Using the example of tau=10 Billion and R0=350, the following graph shows how the reward rate deforming when tau is dropping by 5% every year: 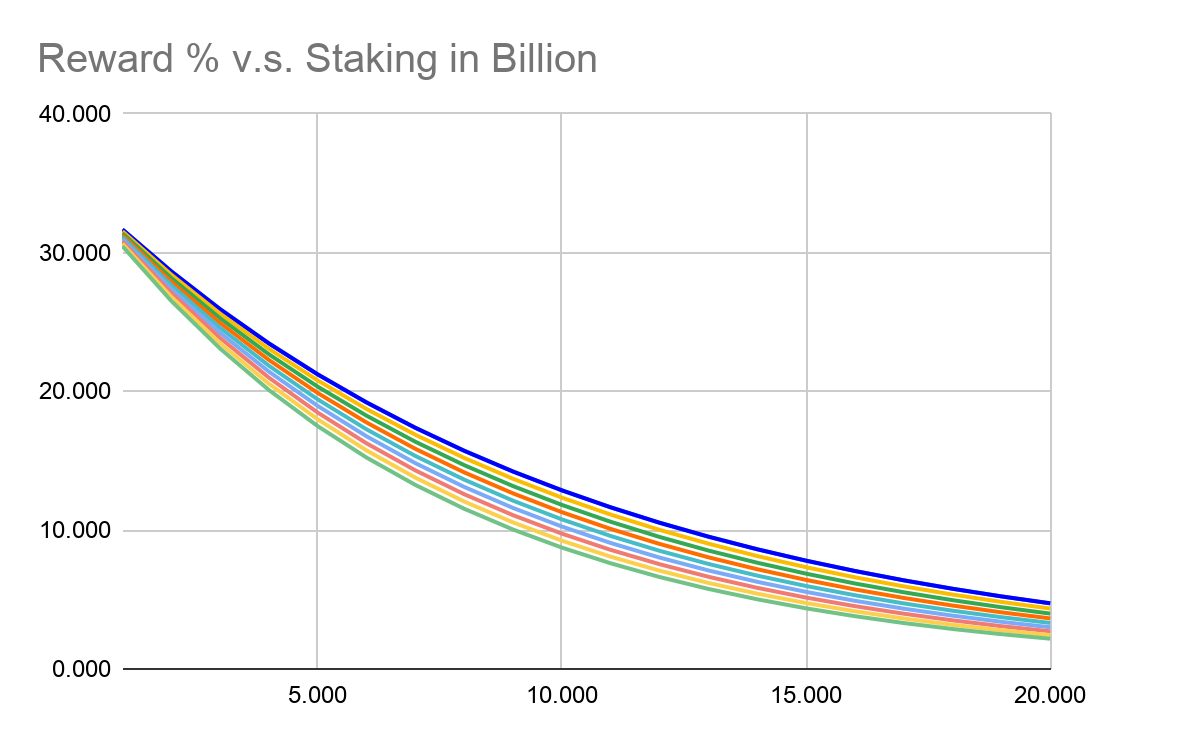 The rewards validator received goes to the bonded balance of their staking account, and results in validator voting power change accordingly.

Rewards are distributed periodically (e.g. daily), which is determined by the network parameter reward_period_seconds. Rewards are accumulated during each period, block proposers and the total voting power of all validators are recorded.

The remainder of division will become rewards of the next period.

# Rewards: Documentation and its interactions with ABCI

The detailed documentation of the reward mechanism can be found in here.

This part describes functionality that aims to dis-incentivize network-observable actions, such as faulty validations, of participants with values at stake by penalizing/slashing and jailing them. The penalties may include losing some amount of their stake (surrendered to the rewards pool), losing their ability to perform the network functionality for a period of time, collect rewards etc.

:::warning Important: During slashing, funds are slashed from both, bonded and unbonded, amounts. :::

Punishments for a validator are triggered when they either make a byzantine fault or become non-live:

:::tip Example: For example, if BLOCK_SIGNING_WINDOW is 100 blocks and MISSED_BLOCK_THRESHOLD is 50 blocks, a validator will be marked as non-live if they fail to successfully sign at least 50 blocks in last 100 blocks. :::

:::tip Implementation note: Tendermint passes Evidence of a byzantine validator in BeginBlock request. Before jailing any account because of byzantine fault, that evidence should be verified. Also, it should be checked that evidence provided by tendermint is not older than MAX_EVIDENCE_AGE in tendermint. :::

It is important that the validators maintain excellent availability and network connectivity to perform their tasks. A penalty should be imposed on validators' misbehavior to reinforce this.

When a validator fails to successfully sign MISSED_BLOCK_THRESHOLD blocks in last BLOCK_SIGNING_WINDOW blocks, it is immediately punished by deducting funds from their bonded and unbonded amount and removing them from active validator set. The funds to be deducted are calculated based on LIVENESS_SLASH_PERCENT.

:::tip Note: The validator is not jailed in this scenario. They can immediately send a NodeJoinTx to join back as a validator if they are qualified (have enough bonded amount and not jailed). :::

A validator is jailed when they make a byzantine fault, e.g., they sign messages at same height and round.

When a validator gets jailed, they cannot perform any operations relating to their account, for example, withdraw_stake, deposit_stake, unbond_stake, etc., until they are un-jailed. Also, a validator cannot be un-jailed before account.jailed_until which is set to block_time + UNBONDING_PERIOD while jailing. UNBONDING_PERIOD is a network parameter which can be configured during genesis.

:::warning Important: block_time used in calculating account.jailed_until should be the time of the block at which the fault is detected (i.e., current_block_height). :::

:::warning Important: When a validator is jailed because of a byzantine fault, their validator public key is added to a list of permanently banned validators and cannot re-join the network as a validator with same public key. :::

When a jailed validator wishes to resume normal operations (after account.jailed_until has passed), they can create UnjailTx which marks them as un-jailed. After successful un-jailing, validators can submit a UnbondTx and WithdrawTx to withdraw their funds.

Validators are responsible for signing or proposing block at each consensus round. A penalty should be imposed on validators' misbehavior to reinforce this. When there is byzantine fault detected, they are immediately slashed other than jailed. During the jailing time, it won't be slashed again for other byzantine faults. The funds to be deducted are calculated based on BYZANTINE_SLASH_PERCENT.

:::tip Implementation note: To enforce that we only slash an account only once within UNBONDING_PERIOD, we can just check if an account is not jailed when we receive evidence of misbehavior from tendermint. :::

# Punishments: Documentation and its interactions with ABCI

← Staking and Council Node Join Crypto.com chain as a validator →